Moscow, Russia, August 8, 2019. There are those players in the Beach Volleyball world, whose names are known by everybody; players who inspire on the courts around the globe year after year, not getting tired of winning. The duo Pablo Herrera/ Adrián Gavirra (ESP) are exactly from these top world teams of which every Beach Volleyball fan has heard at least once in their life. The Spaniards are competing at #EuroBeachVolley in Moscow, having until now a successful campaign, finishing first in their Pool F, looking forward to the most exciting part of the competition.

Herrera and Gavirra have been playing together for more than 10 years now, winning also the Bronze medals at #EuroBeachVolley 2018 in The Netherlands. The relationship between both is an example for what understanding and respect between players can do. So, logically, we are now asking ourselves what are the expectations of the team from this year’s competition. 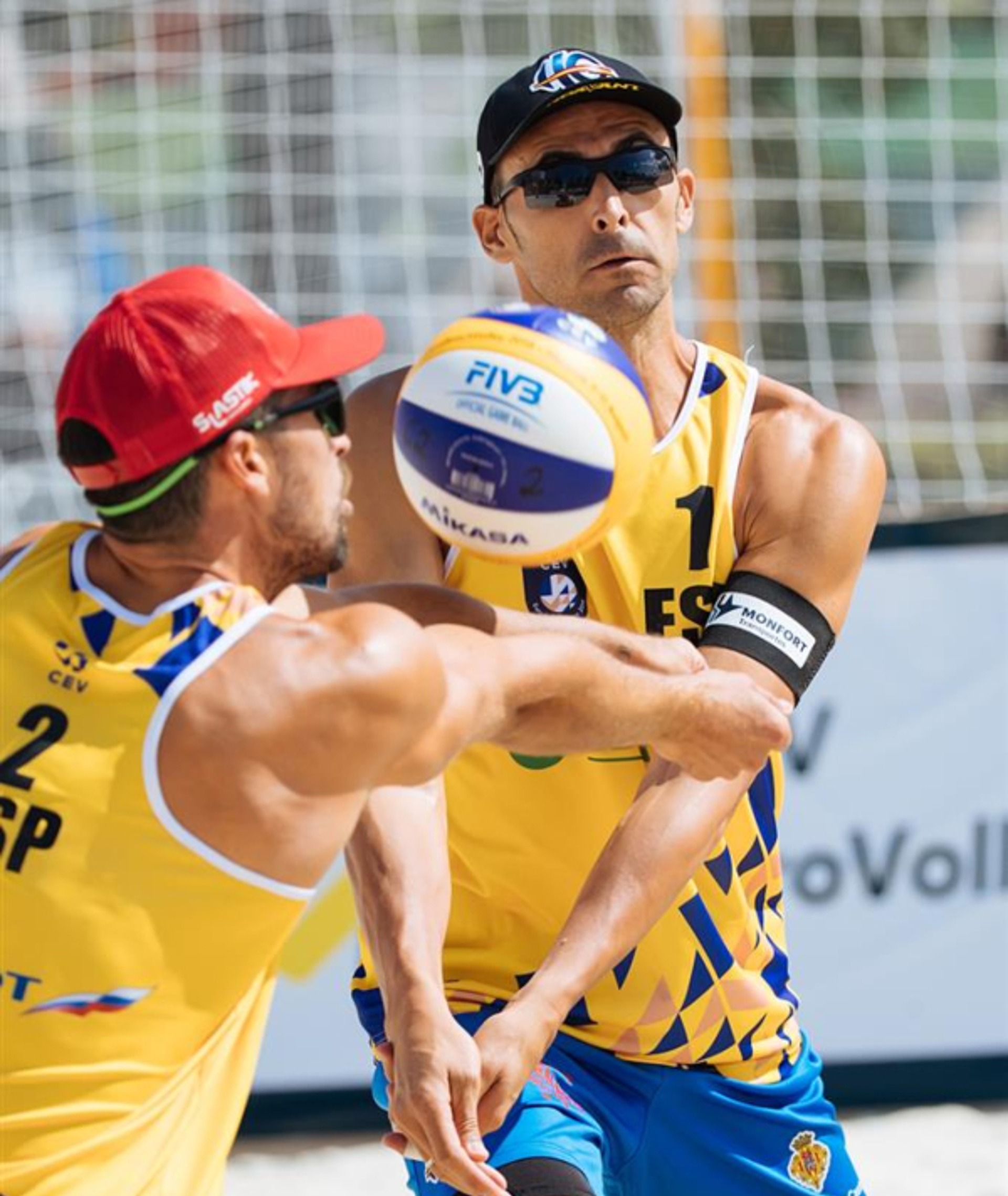 “Most of all, we want to enjoy the game. Now we are in the end of the summer season and it is a little bit more difficult to use the head properly (laughs). We want to have fun while playing”, Herrera says.

Enjoying the game is important to him, but he is also aware of the fact that he has been lucky enough to have a team mate as Adrián Gavira, describing him as “brother” whom he has a lot of respect to.

“The first thing to mention about our team and cooperation with Adri is the respect that we have for each other – as a colleague, as a professional. To me, it is even more than this – we are like brothers. We spend a lot of hours together – inside and outside of the court. And we always look to have a good time together.”

Herrera, himself, is one of the legends in the sport, being around for years, always ready to show what the real fighting spirit means. For such a long time on the courts, the sport has, for sure, changed. Does Herrera agree? “I have played in more than 14 European Championships; many years have passed. The game has evolved a lot. In 2005 we won with Raul Messa the European Championship precisely here in Moscow. It’s been 14 years since then and I can see that things have changed a lot. The players now have a lot more control, they are much more aggressive in their performance on service and on the block. In the end, Beach Volleyball has evolved as everything in the past years.”

Pablo Herrera at the Olympic Games in Athens 2004

The 2004 Olympic Games Silver medallist is a figure that all the young players look up with respect and now some of them have the honor to play against him in the courts of Luzhinki complex. As Herrera describes himself, joking, he is a “relic”, but we think he could share a lot of his wide experience with the ones who are now in the beginning of their careers.

“The only thing that matters here is ‘Work and repeat’. The Beach Volley is a sport of repetitions. Being serious about the physical preparations is very important when we are talking about professional level – this is what gives you the power to resist on the court. The patience is also very important. So, work, stay disciplined and the results will come.”

In his long lasted career, Herrera has had the results coming, but what is the future ahead for him?

“I am not having any specific plans on when to stop playing – as long as my body allows me to, I will keep on doing it. Being in a team with Adri is very easy when it comes to motivation - he is the one who pushes things. We motivate each other and I think that is what makes us stay together for so many years.”

And that’s the good news for the world of Beach Volleyball – as long as there are players as Herrera, who are the living example of the fascinating power of the sport, the future looks bright.