Moscow, Russia, August 6, 2019. As many as 14 matches took place on the Tuesday in the Women’s tournament of #EuroBeachVolley, and to delight of fans and athletes, the sun came up, helping this way for an even more cheerful atmosphere in Moscow. Favorites claimed victories and started on a positive note in the competition, with only the Finnish duo Taru Lahti/ Anniina Parkkinen losing 1-2 from Wild Card holders Anastasiia Frolova/ Aleksandra Granenko.

The duo Joana Heidrich/Anouk Vergé-Dépré (SUI) started very well in the tournament in their Pool B as in the morning they outclassed the team Laura Ludwig/Margareta Kozuch (GER) at 2-0 sets (21-17, 21-13). 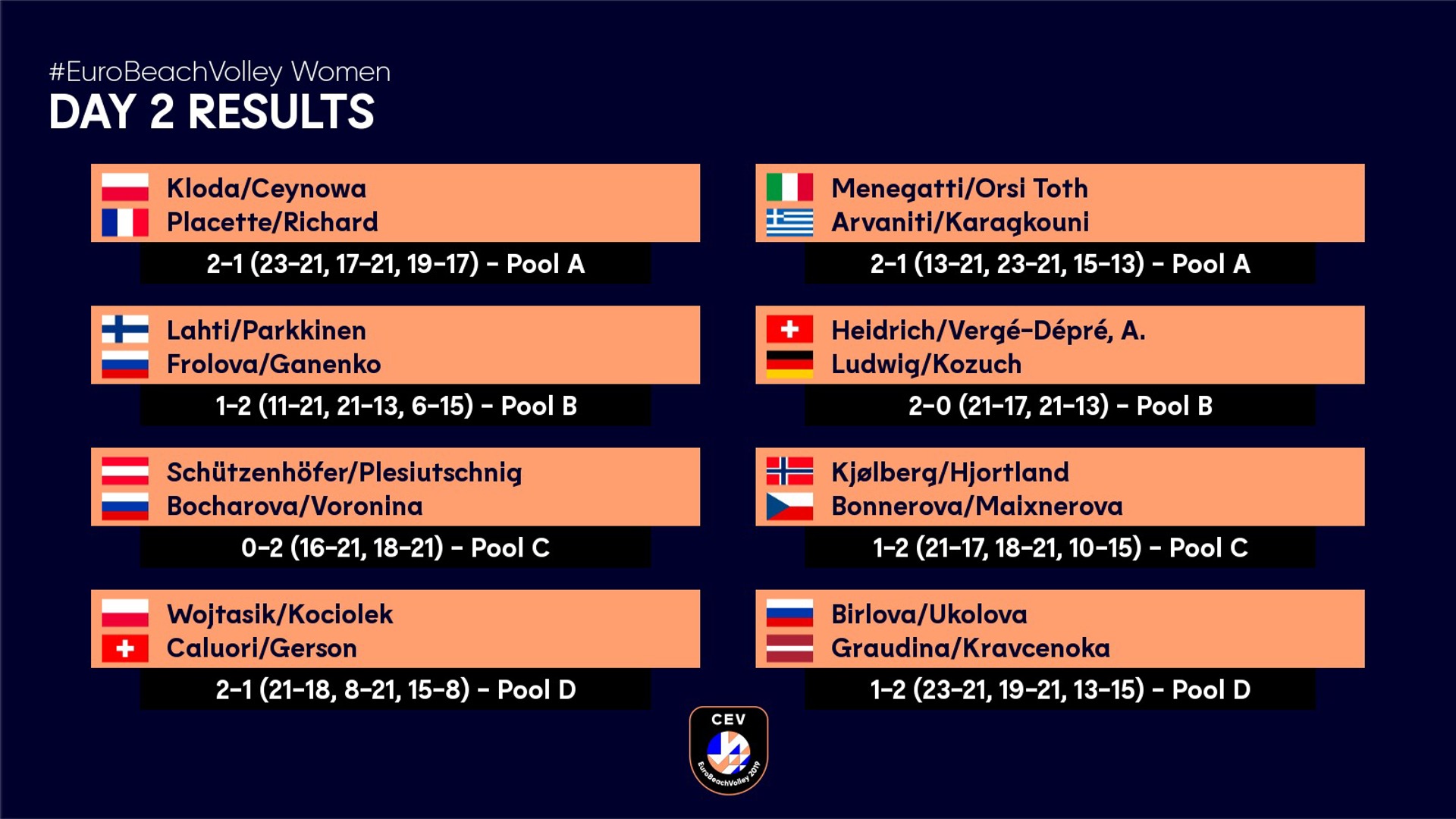 Even though the Germans fought in the first set, the girls from Switzerland entered better in the game overall. Things didn’t change a lot in the second set, as Heidrich/Vergé-Dépré  took the leadership from the very beginning, performing better at the net, while the Germans’ defense was suffering.

“I think we did our stuff really good today. We didn’t get mad, we stayed calm, we didn’t watch the score while we were playing. I think this was the key to success today. It is cold here in Moscow, but these are the conditions for everyone, for every player,” Joana Heidrich stated after the win.

Alexandra Ganenko after the match: “We trained a lot, prepared a lot.  Of course, the weather is cold, but in spite of this we will try to show a good game here.  In the second set today we made a lot of mistakes.  In the third set, we were able to get together and win”.

The match between Marta Menegatti/Victoria Orsi Toth (ITA) and Vasiliki Avaniti/Panagiota Karagkouni (GRE) in Pool A became a real spectacle for the Beach Volleyball fans, attending #EuroBeachVolley on Day 2. The Greek girls took the initiative in the first set by leading 16-11 and to the spectators’ joy, there were some great and fast rallies. Even though that they have lost the first set, the Italians responded immediately in the second one.

However, the Greek team also fought well and both sides constantly exchanged their leadership. Menegatti/Orsi Toth showed better nerves in the decisive moments and equalised then the set score at 1-1, tying the result. In the decisive set both teams were constantly breathing down each other’s necks, but Le Azzurrine emerged victorious at 2-1  (13-21, 23-21, 15-13). 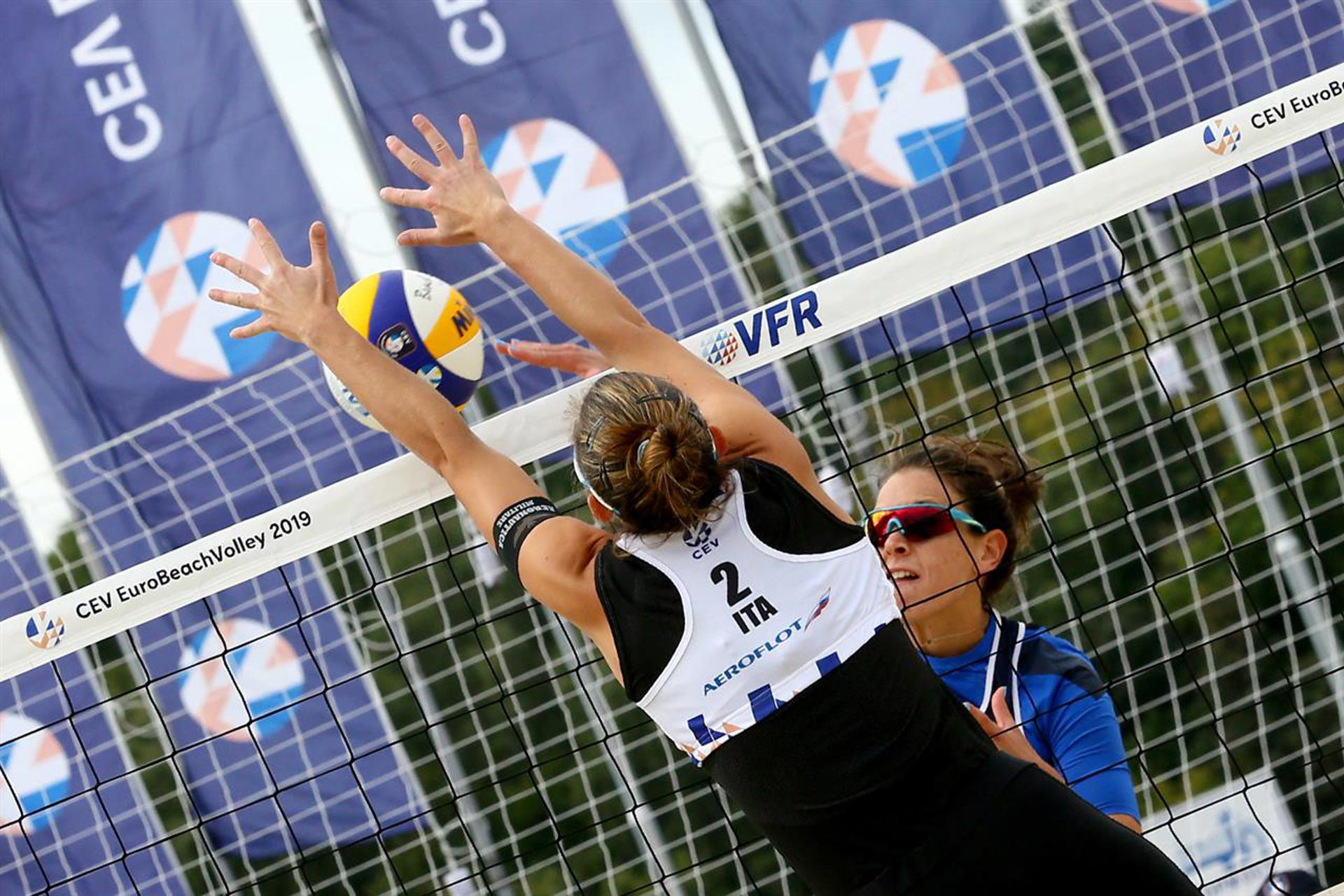 “We had problems with the diggings and this resulted in making the game more difficult for us. However, we managed to stay focused on the solutions, we had some ups and downs, but we tried to get better. I think that once we improved our performance in defense, we could find our game”.

One of the hosts hopes of winning a medal of #EuroBeachVolley – the team of Nadezhda Makroguzva/Svetlana Kholomina also started good in pool H and despite having had some troubles in the second set of their match against Diana Lunina/Maryna Samoday (UKR), they could seize the victory at 2-1 (22-20, 14-21, 15-6).

Makroguzova stated after the match: “We did not have control of every ball.  Seems we were thinking globally about the whole tournament, and could not concentrate on specific elements. Only at the end of the third set we were able to show a piece of our game.  We planned to show interesting combinations so that the audience could see nice performances, but we simply played in reception. We will try to increase the speed of our game” 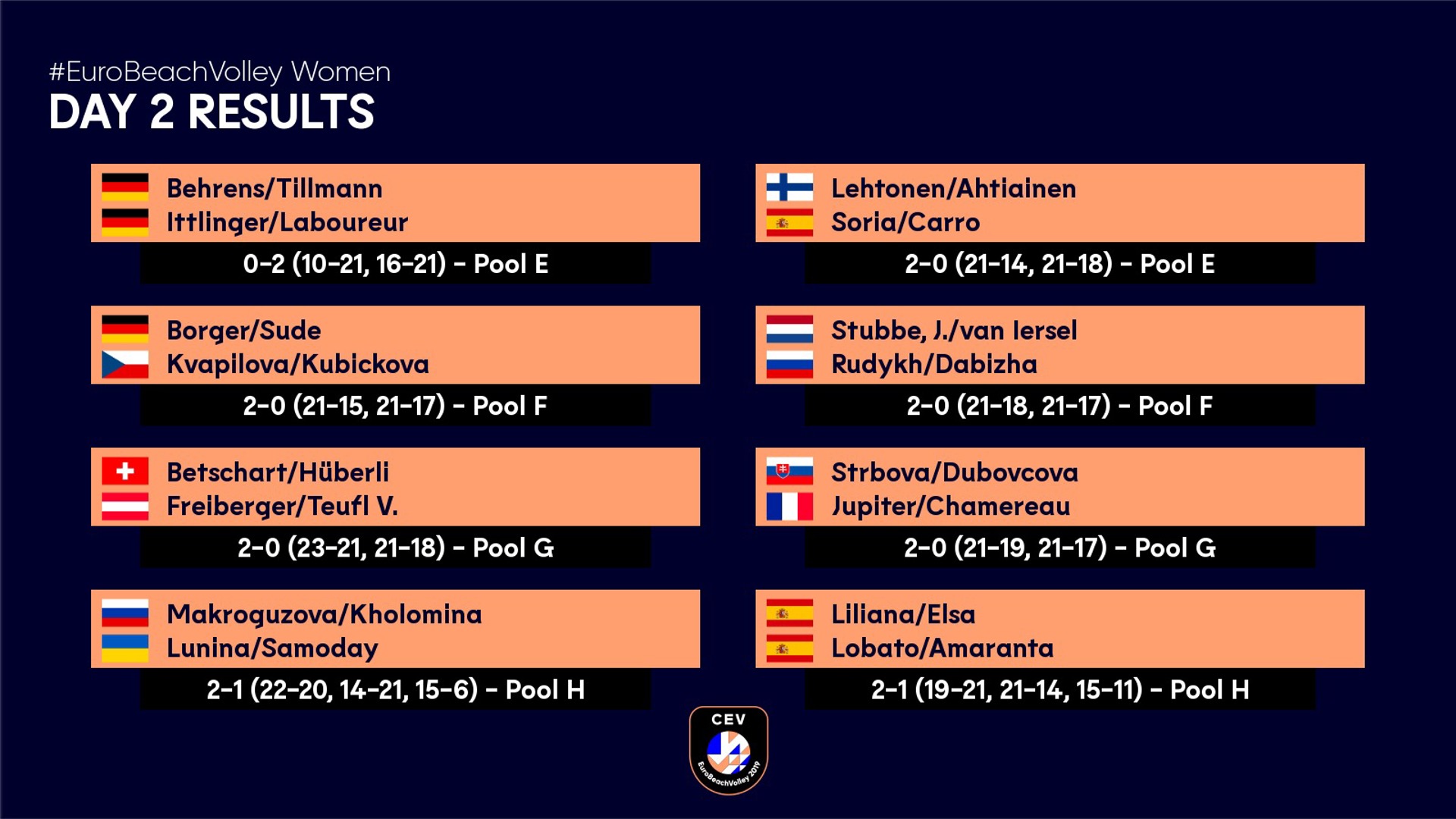 In Pool F Joy Stubbe and Marleen Ramon-van Iersel (NED) disappointed the home team of Daria Rudykh/Ksenia Dabizha, claiming a 2-0 victory (21-18, 21-17).  It was a point-for-point game in the beginning of the first set. However, in the last moments, the Dutch would establish their rhythm of play and deservedly open the match in their favor. Same scenario unfolded in the first minutes of the second set, but this time around the Russian girls were leading at 19-16. Although it seemed that the set score was to be equalised, Stubbe and Ramon-van Iersel didn’t give up and eventually closed in their favor.

“In a first match of a tournament you need to step in with full power and we are happy we did so and we won it. We have some tough opponents in our group, we were also aware of our Russian opponents today- they played very good actually. We believe that in the next games we will need to bring our own game”, the winners stated after the match. 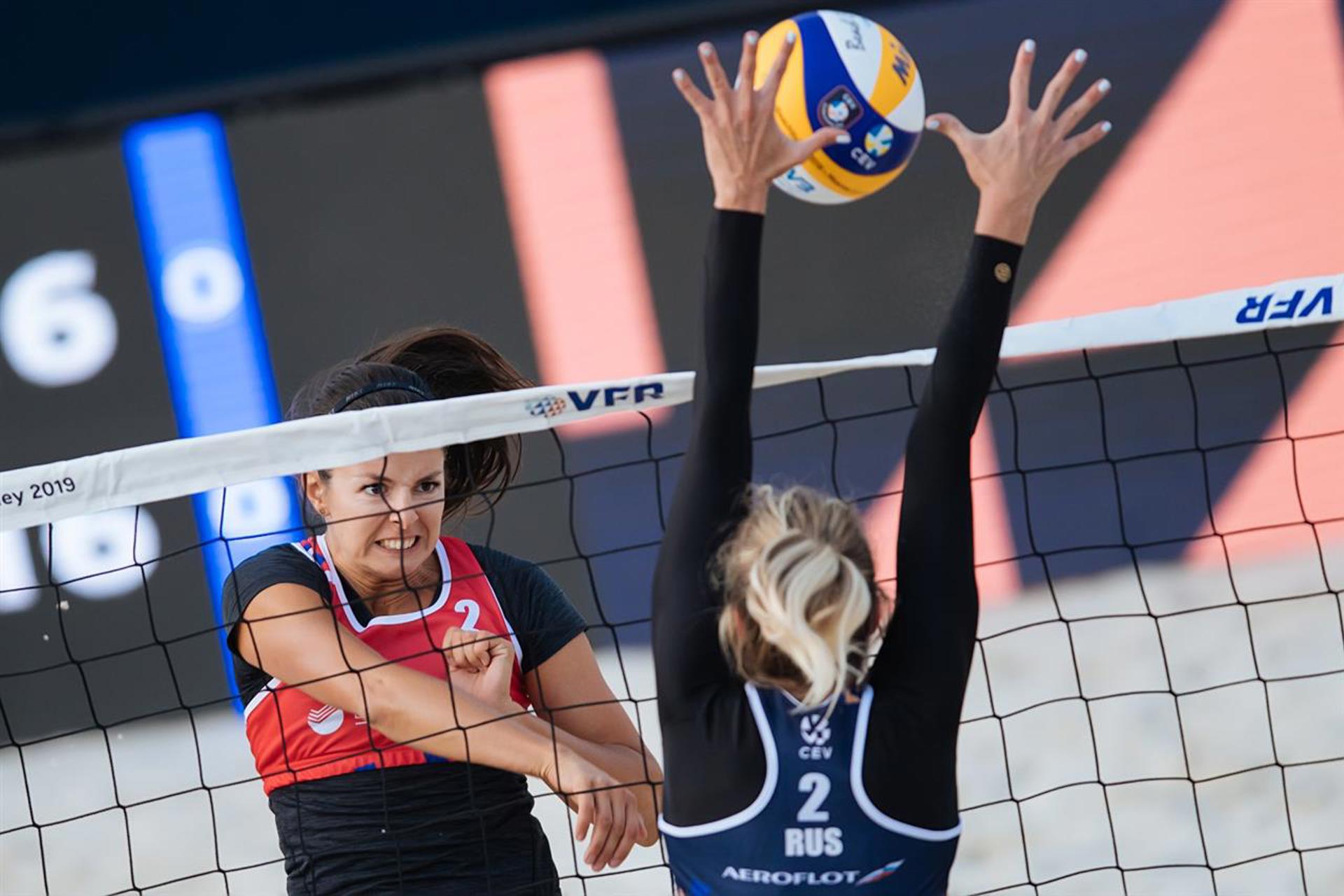 In the last match in the Women’s tournament for the day, the Latvian stars Tina Graudina and Anastasija Kravcenoka, who are silver medallists from last year’s #EuroBeachVolley U22 did a great job vs the Russians Ekaterina Birlova and Evgenia Ukolova, winning at 2-1 against them (21-23, 21-19, 15-13).

Both girls were very tired as the rallies were fast paced and the whole match – intense, as they firs lost the first set, but then got back on their feet for equalising and even winning. This is a second win for the Latvians vs.the Russian as early this summer they outclassed them at 2-0 at the World Championship in Hamburg.

"Same as last time it was a very close match. In Hamburg we were behind in both sets and only managed to go into the lead at the very end. This tournament is very interesting, there are no sure leaders, 10-11 teams came to Moscow thinking they could end up with a medal, but obviously that is not possible, so it will be interesting to see, who ends up on top."