Bronze for Austria, Norway and Russia in a fight for the Gold at #EuroBeachVolley

Moscow, Russia, August 11, 2019. As in life, in Beach Volleyball you can never predict how things will unfold. And this is what the final day of the Men’s tournament of #EuroBeachVolley showed us so far. The Austrian sensation Martin Ermacora and Moritz Pristauz will go home with the bronze medals as they lost 0-2 from the hosts Konstantin Semenov and Ilya Leshukov in the second semifinal match, but due to an injury of the Polish Piotr Kantor (who, together with Bartosz Losiak lost 1-2 their semifinal match vs. the Norwegian top team and reigning European champions Anders Mol and Chrstian Sørum) no bronze medal match will take place. The bronze medal is the biggest achievement so far for Ermacora and Pristauz. The Gold medal match will start at 18:00 CEST and Mol, A./ Sørum will meet Semenov/Leshukov in a battle for the first place. 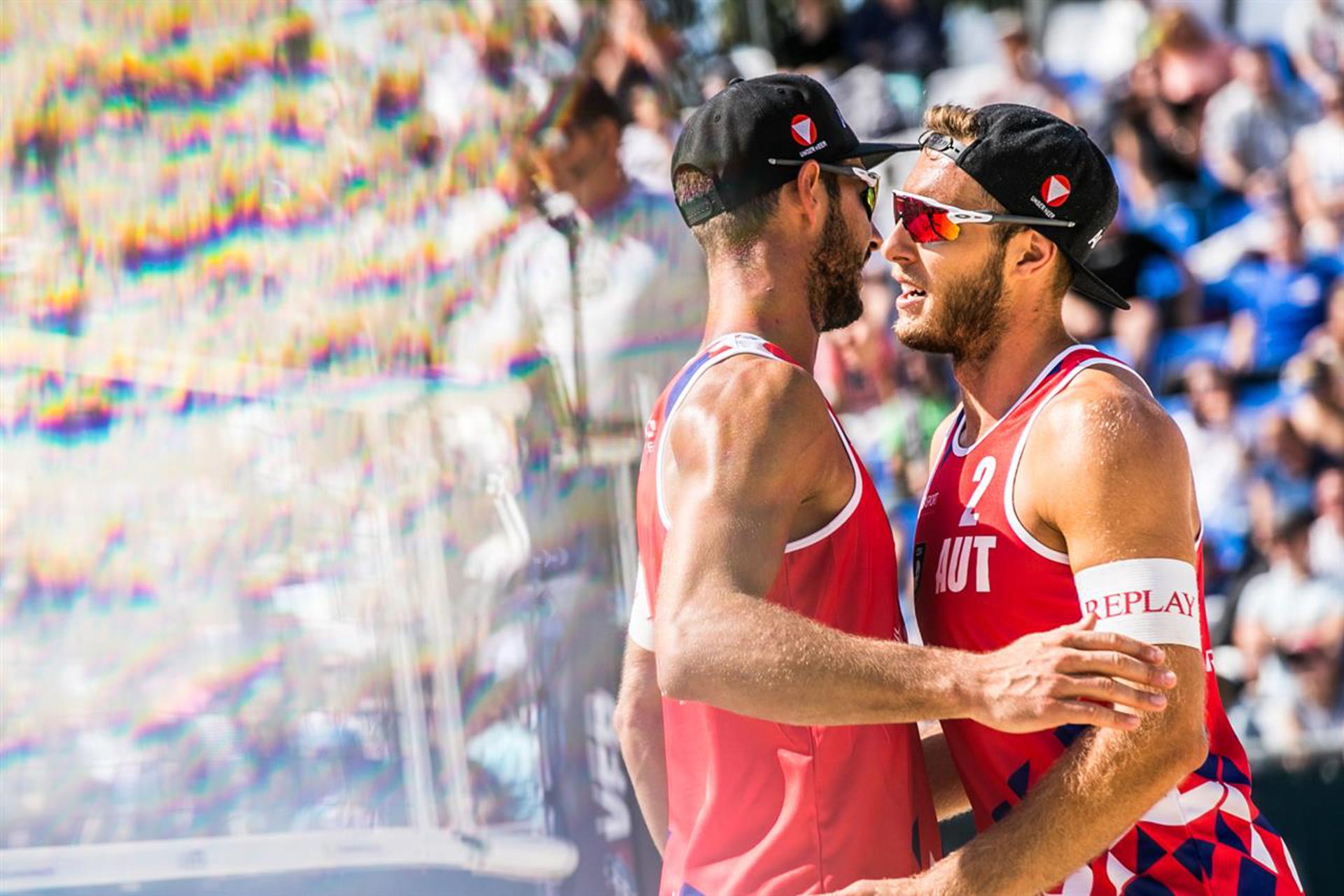 The bronze medallists from 2019 FIVB Men’s Beach Volleyball World Championship –Mol and Sørum entered this match as favourtes, but could not take the lead in the beginning of the first set, with Piotr Kantor and Bartosz Losiak showing good performance on block. The ‘BeachVolley Vikings’, as Mol and Sørum are known, pushed to equalize (14-14), but the Polish kept the two-points difference and also made it to three points thanks to an ace by Piotr Kantor. Mol and Sørum were able to equalise and both teams did some great jobs with nice spikes in the last moments of the set. Kantor and Losiak were more concentrated in these last moments and with a nice block by Losiak opened the match. The Norwegian vikings in action

Losiak scored an ace as well in the beginning of the second set and the game went point for point. Mol responded with an ace himself for 9-7,  as the Norwegian duo was trying to slowly establish their rhythm. However, the Polish tried to push and not give their opponents the opportunity to feel no pressure. They were even leading at 16-15 when Pitor Kantor, who on Saturday got a palm hand injury, asked for medical help for a problem with his ankle. The game stopped and although Kantor decided to go back to the court, the Polish team lost concentration and Mol/ Sørum took advantage out of this, equalising the set score and bringing the match into tie break.  It was later confirmed that Kantor is suffering from ankle injury ligament severe with possible fracture and the Polish team could not play for the Bronze. 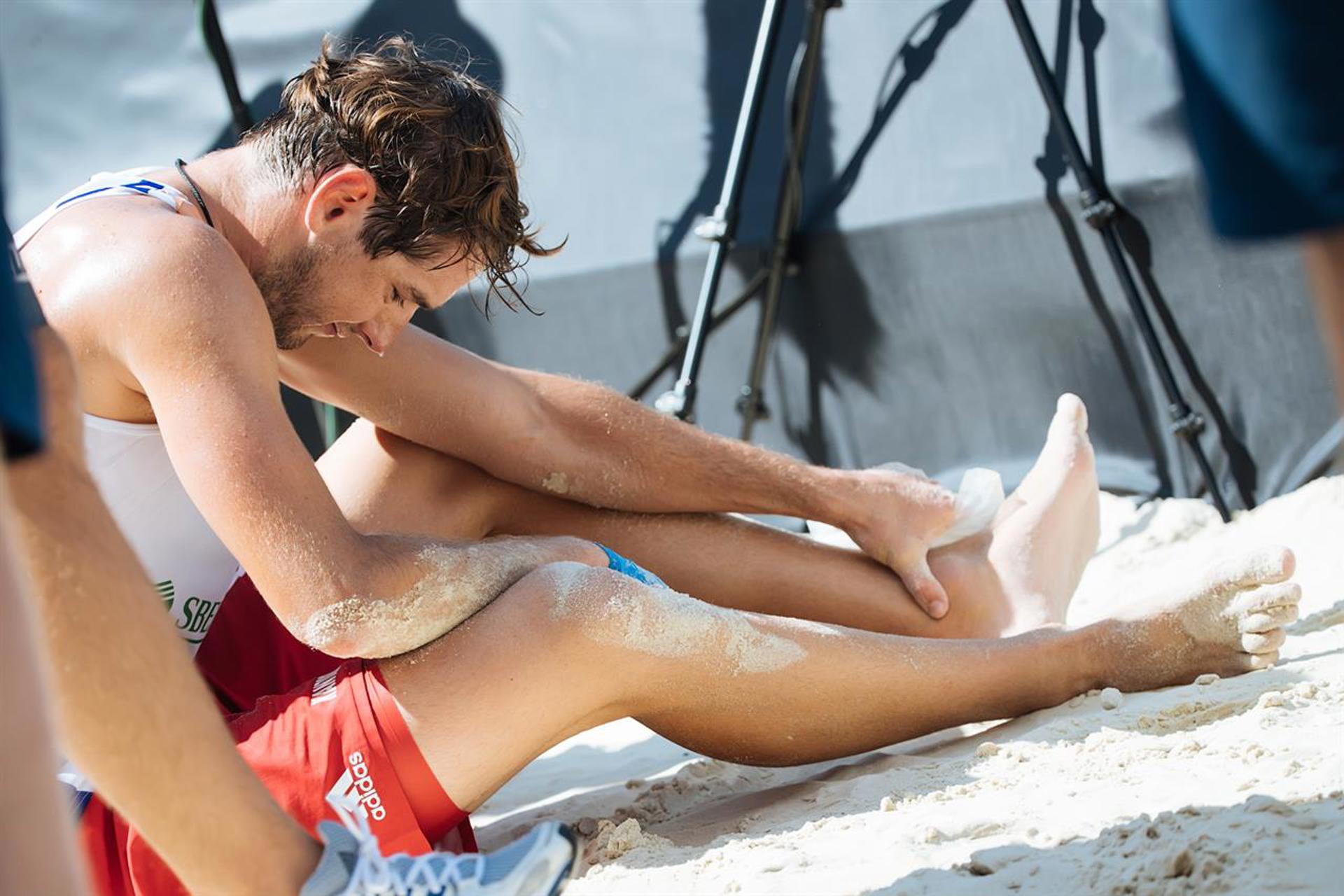 Piotr suffering from the injury

In the tie break Mol and Sørum took the lead from the very first moment. Kantor and Losiak were trying to change the situation, but it seemed that Kantor’s injury affected a lot their game. After the end of the match, Kantor was sent with applauses by the crowds at Luzhniki Stadium.

Winning the semifinal match would have meant that Kantor and Losiak would have written a new page in Polish Beach Volleyball history, as going to the Final would have meant at least silver medal with bronze having been until now the best result for Polish teams.

Anders Mol after the match: “It was a difficult match, we didn’t play our best today. I think that the Polish guys really deserved the win today because we didn’t play our best. It feels a little bit bitter –sweet being in the final now. He injured his ankle and until this moment, they were playing very good. I think that if he wouldn’t have twitched it, maybe they would have won 2-0. Right now we are in the final, we are really happy, of course, but it is always a little bit bitter-sweet when you see your opponents being hurt.”

Now we just have to relax. The first match on a day is always the most difficult one and I hope that for the next one it will be better for everybody and we are ready to play both teams.

The Russians Konstantin Semenov and Ilya Leshukov locked horns with the Austrian players Martin Ermacora and Moritz Pristauz in the second semifinal match for Sunday. Many fans came at Luzhniki complex to support their favourites and to help create an outstanding atmosphere for a real Beach Volleyball party and make them happy, the Russians claimed the victory. 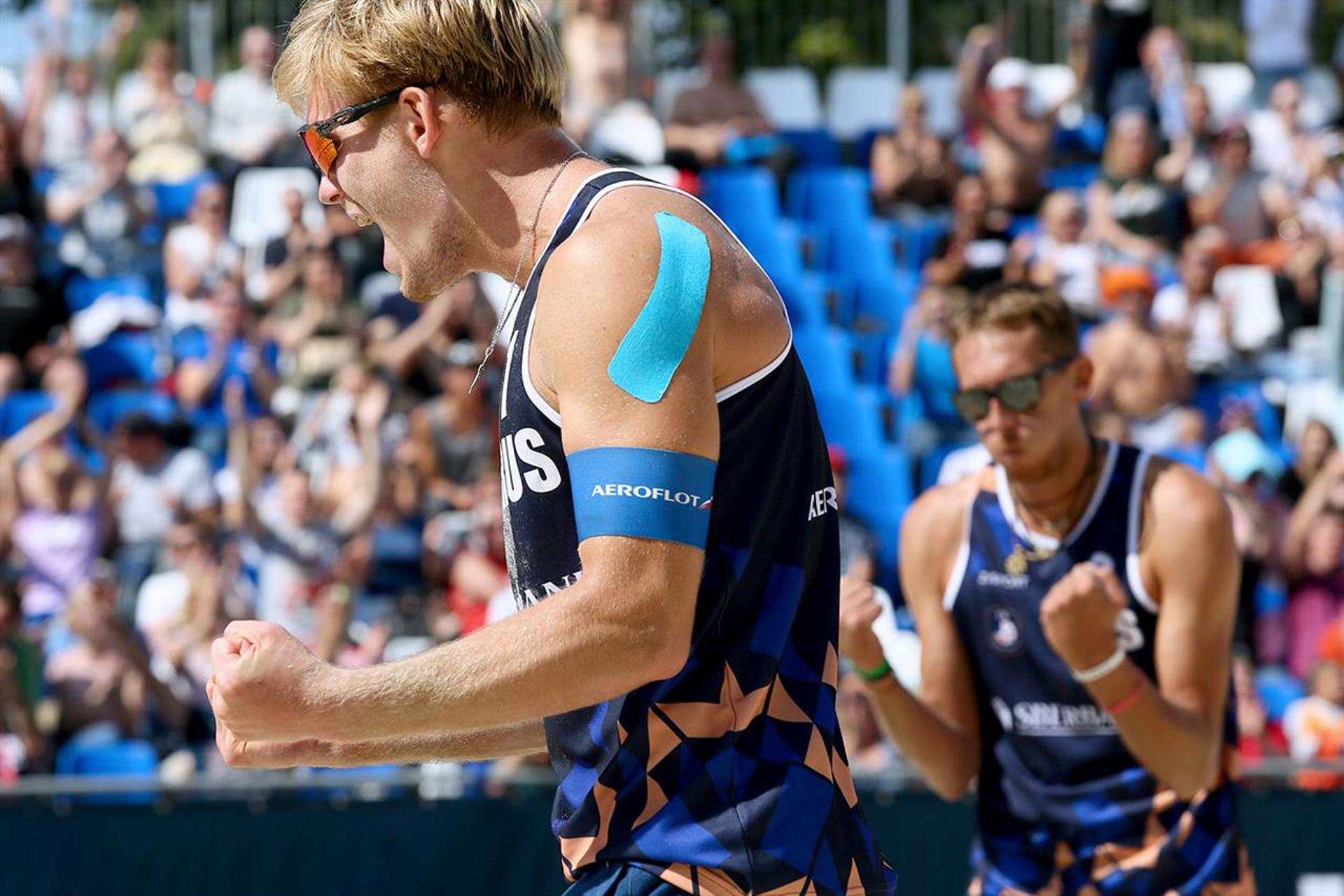 Semenov and Leshukov, who are the bronze medallists from the World tours in the Hague 2019 and Warsaw 2019 did not mislead their compatriots’ hopes, and being the only remaining Russian team in the competition, entered the court motivated and determined to proceed to the Gold medal match.

However, the 2-0 win was not that easy as it seemed from outside of the courts as Ermacora and Pirstauz, being also inspired by their outstanding campaign at #EuroBeachVolley so far, showed great great play. Both teams were constantly following each other in the score during the first set (4-4, 13-13, 15-15), fighting for each ball. In the decisive minutes of this match, the Russian players took control and emerged victorious. 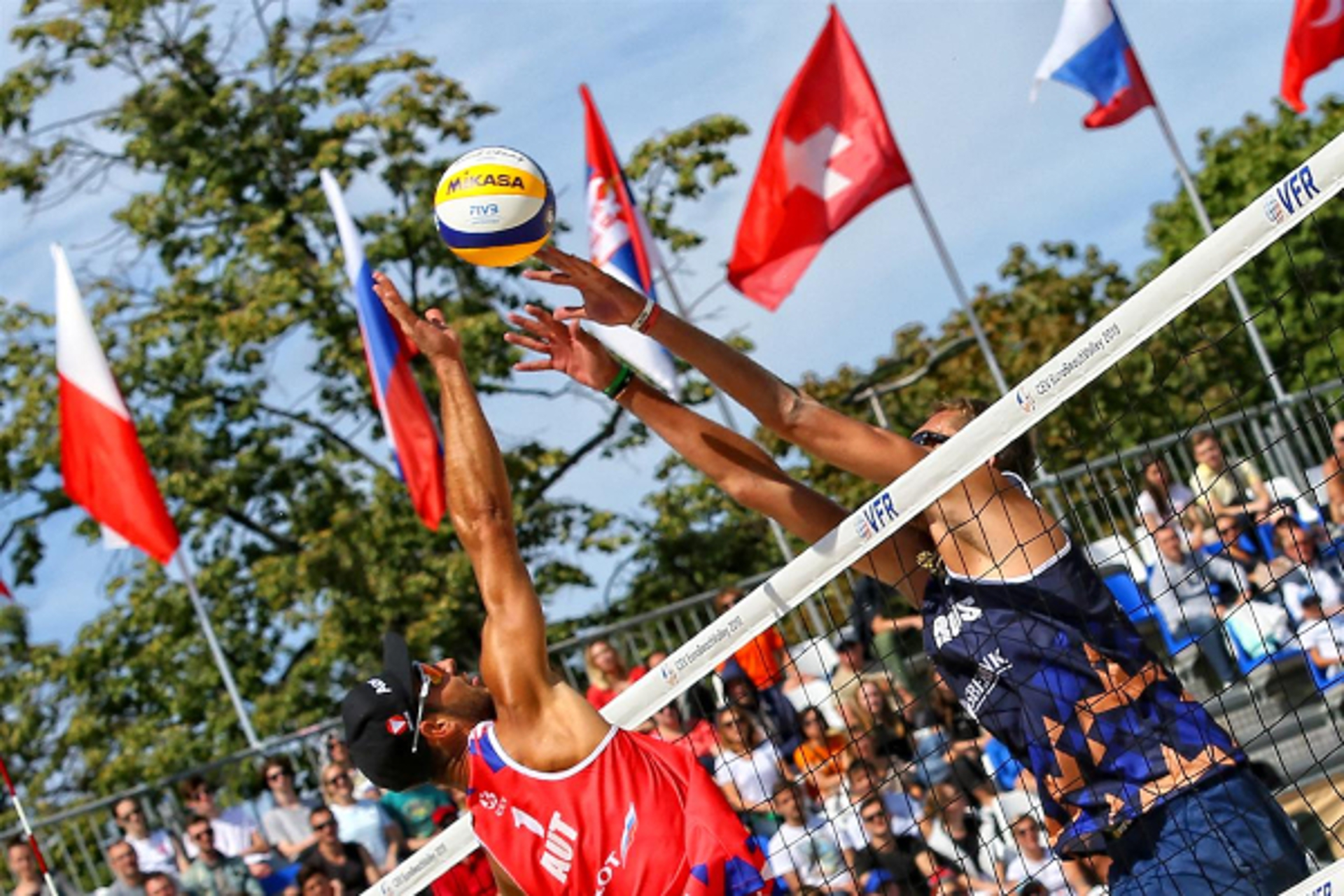 Net action in the second semifinal

Almost the same scenario unfolded in the second set as the teams were showing rather equal play, but after the 10th point, Semenov and Leshukov started to slowly build up a point difference. With no big surprises until the end of this set and with a great ace by Konstantin Semenov, the Russian due closed the match.

After the end of the game, Pristauz and Ermacora were given the news that they are the new bronze medallists at #EuroBeachVolley. Both players couldn’t believe and people around could see their tears of joy.

“I don’t believe it until I have it until my neck.”, Moritz Pirstauz said. “This was the best tournament that we have done so far in our careers. Of course, it is never nice when somebody is injured. That is really unfortunate for the Polish team. We are happy that we could reward ourselves with medals.”

Our goal for the tournament was to get out of the groups. We didn’t expect to go so far. It all looks like a fairytale for us. We started quite bad with the first match. But after it, we changed our behavior, we raised the level and I am so proud of this guy here next to me! We had so much fun together, we grew so much, knowing now that even if we make some mistakes, we can keep our heads high and continue on fighting for each ball.

The Gold medal match will be livestreamed on EuroVolley.TV.