There is no arguing that David Åhman and Jonatan Hellvig are among the most promising beach volleyball players to emerge in Europe in the last few years, but how do they stack up against the elite of the continent? After a longer wait than they would have liked, this question will start to be answered later this month, when the Swedish will compete at the 2022 CEV EuroBeachVolley, which will be part of the European Championships Munich, from August 15-21. 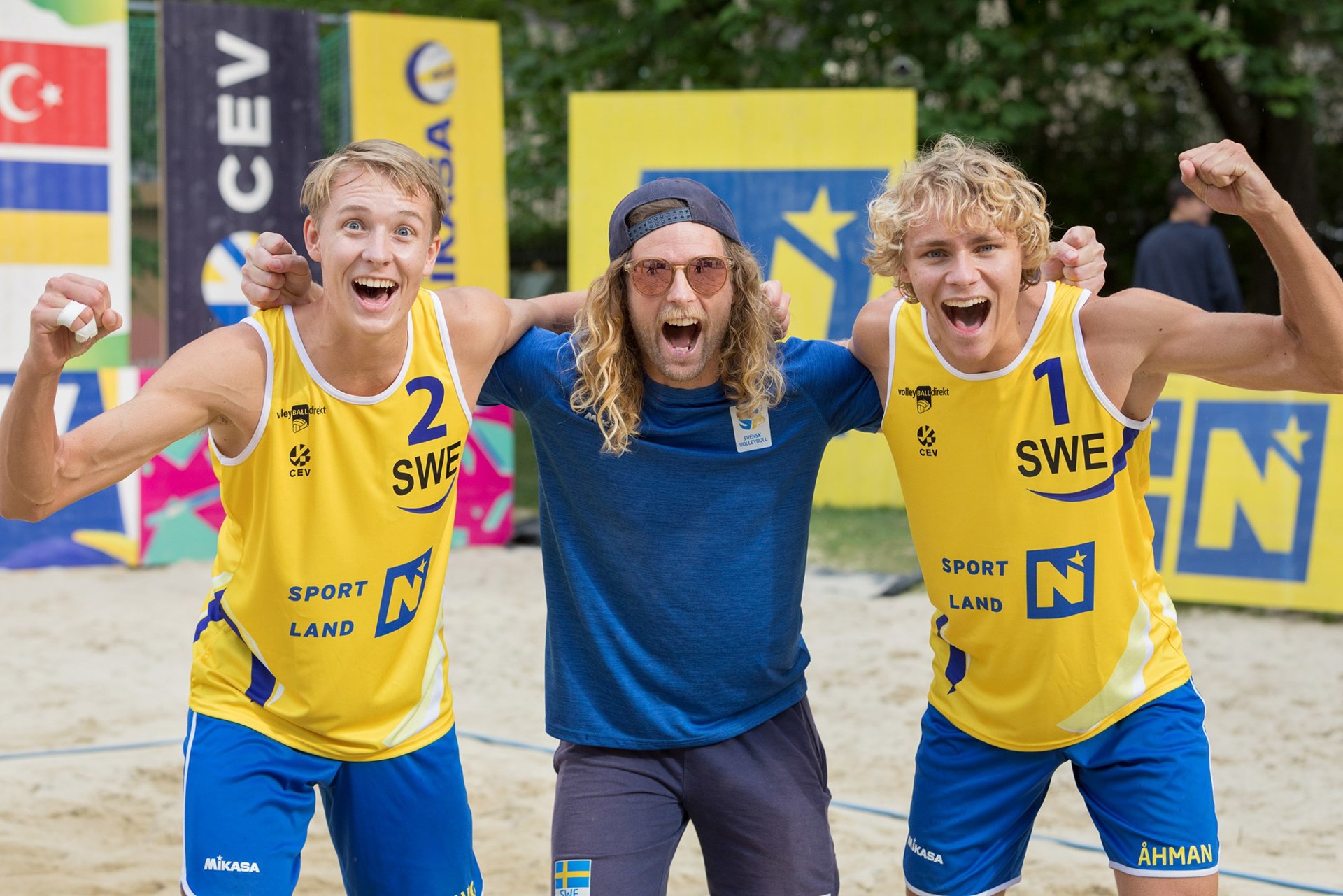 The Swedish pose with coach Rasmus Jonsson after another victory

The 20-year-old Swedish have earned quite a reputation at Under Age European Championships, having won continental U18, U20 and U22 titles over the last four years, as well as gold medals at the Youth Olympics and the U21 World Championships. Now it’s time to take another step forward and compete against the best of the continent for the first time at this year’s #EuroBeachVolley.

“It will be our first time at the #EuroBeachVolley and we can’t wait to play against the best teams in Europe. We’re really excited to represent Sweden. We know there will be a lot of people watching our matches back home and we’ll do everything we can to have a good result.” 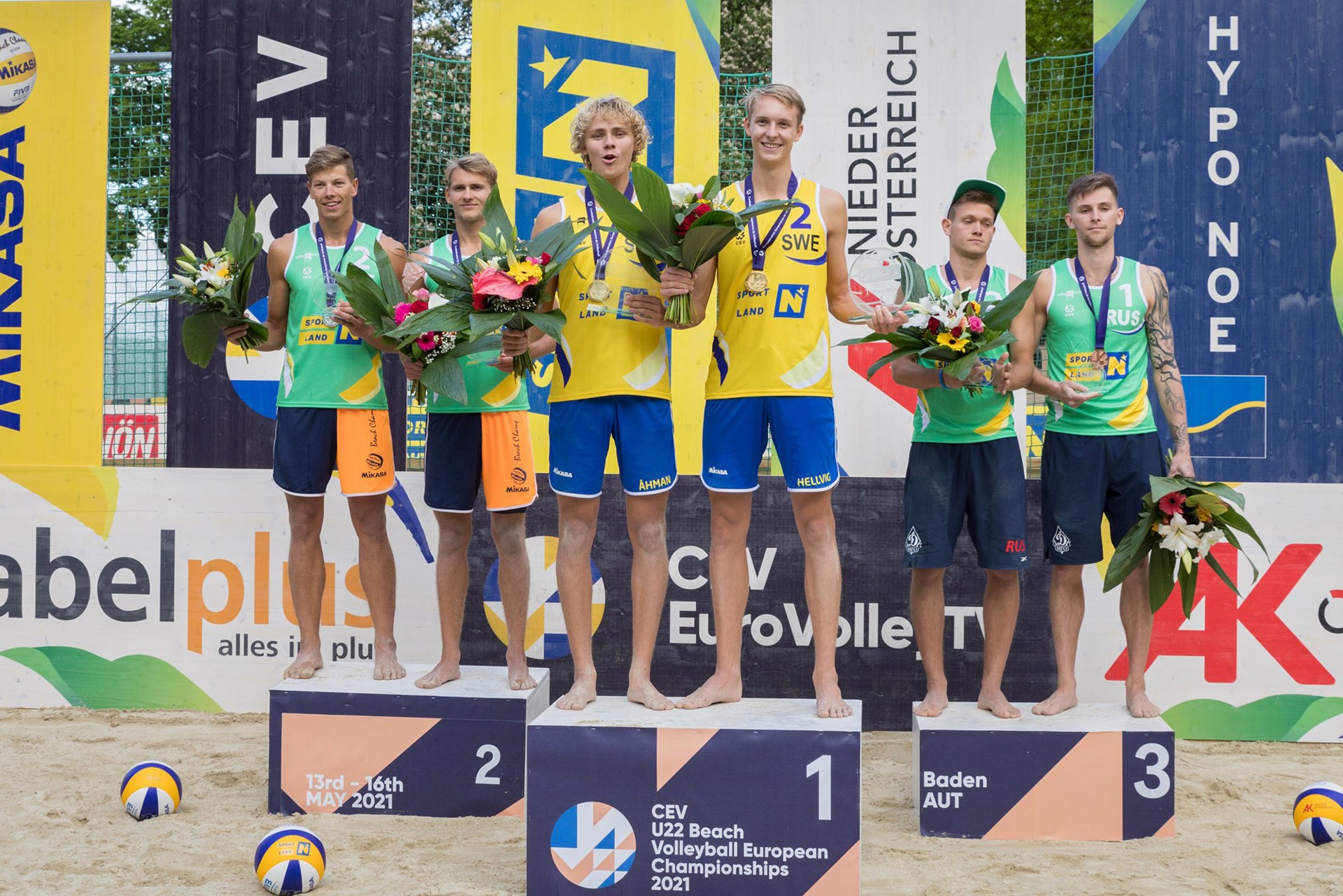 Their #EuroBeachVolley debut nearly happened last year. Still starting their senior careers, Åhman and Hellvig missed the cut on the entry list for just a few points. As one of the best-ranked reserve teams, the two even made the trip to Vienna and practiced there in case a last-minute withdrawal happened.

To their frustration, after feeling the atmosphere of the event in person, the two continued to look from the outside when the teams were finally confirmed and headed back home, already thinking about returning in the next year.

“For us it really sucked that we didn’t make it in. We knew that we were good enough to play and had even beaten some of the teams that competed at the event. We didn’t stay in Vienna to watch, but we followed some matches on the livestream.” The Swedish have showed consistent progress over the last years

This year, the Swedish had a similarly frustrating experience at the World Championships. This time they were among the 48 teams qualified for the event, but during a training session in Rome, Hellvig broke a bone in his hand and was forced to withdraw, postponing their team’s debut in what would have been the biggest event of their careers for at least another year.

“It was so frustrating because we felt we were in really good shape. It was an unfortunate injury to Jonatan but it’s now fully healed and we’ve been training and playing again. Missing the World Championship and last year’s #EuroBeachVolley has definitely further sparked our excitement for this year’s event and the #EuroBeachVolley is for sure the main event of the season for us.”

Despite the negative experience in Rome, it’s certainly not accurate to say the international season hasn’t been a good one for the Swedish so far. Because of the injury, Åhman and Hellvig have just been able to play in four Beach Pro Tour events in 2022, but still managed to get their first victory in Kuşadası, Türkiye, and a fifth-place finish in Tlaxcala, Mexico.

“That victory in Kuşadası was very important for us. It really showed that we have what it takes to compete at the elite level on the senior side too. It showed we’re on the right path with the way we play and also earned us some important Beach Pro Tour points, which will allow us to play in some other big events.”

In Munich, the Swedish will be tested against the best in the continent right from the first day, when they will play Norwegians Hendrik Mol and Mathias Berntsen. A victory will likely set up an exciting matchup against reigning Olympic and world champions and four-time #EuroBeachVolley winners Anders Mol and Christian Sørum, who are also in Pool A and will start their campaign against Israelis Eylon Elazar and Netanel Ohana.

“It’s definitely a tough pool. We’ve played Mol and Berntsen before and it was a really close match, so I certainly expect another tough one. It would be very fun if we got to play Mol and Sørum since we never played them in a tournament before. It’s a tough pool but I’m confident that if we play well, we can make it to the elimination round.”