Not even in their best dreams, David Åhman and Jonatan Hellvig could have hoped for such a fantastic CEV EuroBeachVolley debut. The Swedish wonderkids ended what already was a historic campaign in the 30th edition of the tournament with the gold medals around their necks in Munich on Sunday. The 20-year-olds were in stellar form in the gold medal match and didn’t feel the pressure of playing the most important match of their still young careers in front of a packed Königsplatz, dominating Czech Olympians Ondrej Perusic and David Schweiner to a comfortable straight-set (21-16, 21-15) victory.

“It feels unbelievable. We knew they would be a very tough team to beat, but we played incredibly well. I’m very proud of what we did.”

Åhman and Hellvig have, indeed, every reason to be proud. Their participation in the 2022 EuroBeachVolley carried a lot of weight for Swedish beach volleyball right from the start as it marked the country’s return to the event after six years. The medal they won in Munich is also the first ever claimed by a Swedish team at the EuroBeachVolley and certainly the biggest accomplishment in the nation’s beach volleyball history.

Their historic title also made of Sweden the 15th different nation to step on the podium in an edition of the EuroBeachVolley. Their country is also the 12th to take gold in the 30-year history of the sport’s premier continental event. Åhman hits during the gold medal match in Munich

Their triumph in Munich is the biggest achievement in what has been an extremely promising beach volleyball journey for Åhman and Hellvig. Over the last four years, the two have won U18, U20 and U22 European titles, a U21 world title, the Youth Olympics and their first gold medal at the Volleyball World Beach Pro Tour.

Entering the event, the Swedish said they were ready to face the elite of the continent and they left no room for questions about it with their campaign in Munich, which saw them win six of their seven matches, eliminating seven Olympians and four Olympic medalists on their way to win gold. The Königsplatz was a fantastic venue for the EuroBeachVolley

Their most emphatic triumph actually happened a few hours before the gold medal match, in the semifinals, when they stunned four-time EuroBeachVolley defending champions and reigning Olympic and world champions Anders Mol and Christian Sørum in a dramatic three-setter (21-16, 21-23, 15-13). The Norwegians were the only ones to defeat the Swedes in Munich, still in pool play.

For Perusic and Schweiner, the silver won in Munich marks their best result in four EuroBeachVolley appearances. The two also brought the Czech Republic back to the men’s podium in the event for the first time in 26 years, since Marek Pakosta and Michal Palinek won the tournament in 1996. 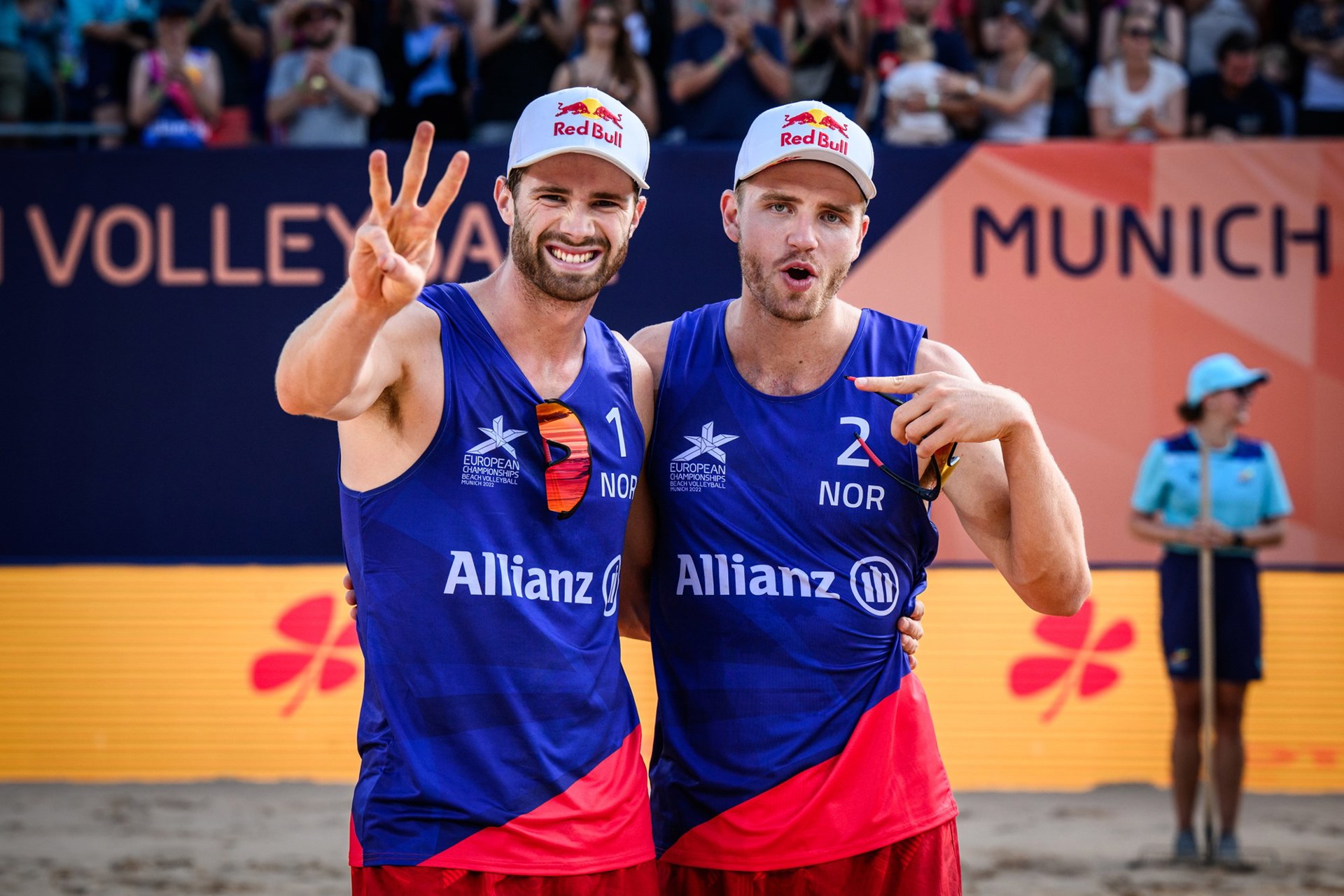 The winners of the last four editions of the EuroBeachVolley, Mol and Sørum had to settle for bronze this time. The Norwegians defeated Poles Michal Bryl and Bartosz Losiak in straight sets (21-16, 21-17) at the Königsplatz to finish third.

The Beach Volley Vikings are now just the third men’s team to make five consecutive podium appearances, joining Swiss brothers Martin and Paul Laciga, who won three golds, two silvers and one bronze between 1997 and 2002, and Dutch Olympians Reinder Nummerdor and Richard Schuil, who claimed three golds, one silver and one bronze from 2007 to 2011.