Moscow, Russia, August 9, 2019. As #EuroBeachVolley is reaching its climax, matches are getting more and more intense, and despite the windy and rainy weather, the athletes fight for each point on the courts.  The big surprise on the fourth day of play came up with the elimination of the FIVB Men’s Beach Volleyball World Champions – Russians Oleg Stoyanovskiy and Viacheslav Krasilnikov, losing 0-2 from the Austrian sensation Martin Ermacora/Moritz Pristauz in Round 2. Injuries affected the outcome of other matches, but in the end, the quarterfinal matches set the tone for a great Beach Volleyball spectacle on Saturday at Luzhniki Complex.

The autumn-like day at Luzhniki Complex started with teams locking horns in Round 1, trying to secure a spot for the match with the pool leaders, who qualified directly to the Round of 16. 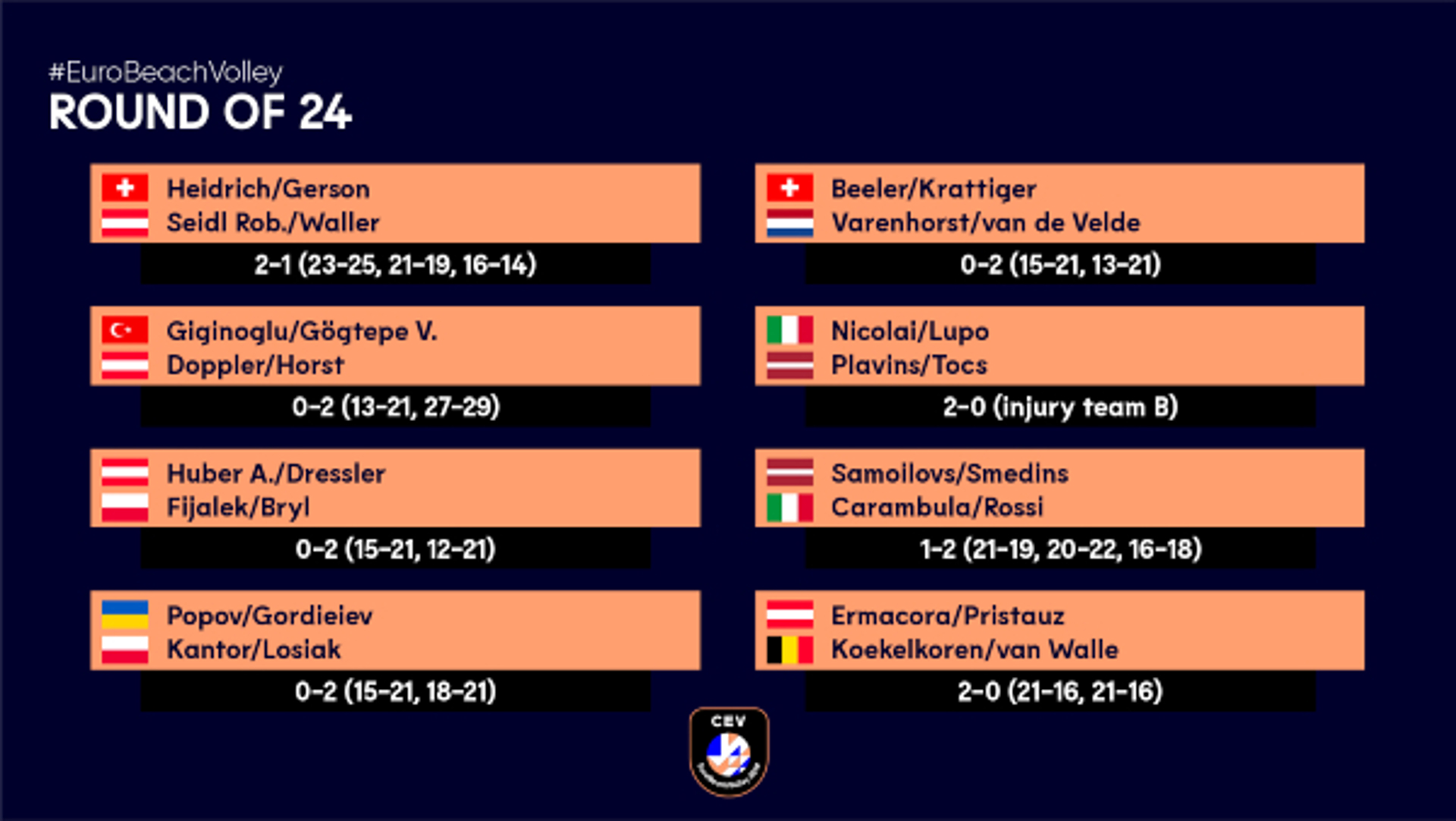 The Austrians Martin Ermacora/Moritz Pristauz proceeded to the next stage after 2-0 (21-16, 21-16) over Koekelkoren/van Walle (BEL) and met later on Friday the World Champions Viacheslav Krasilnikov/Oleg Stoyanovski (RUS).

Before meeting the Russian team, the Austrian commented on their first match of the day: “It was very windy, which suits us very much for the jump serve and take risk on that. We performed very well in the match against the Belgians. By improving our serve and putting a pressure on it, we took the control of the sets. We have never played with the Russians Stoyanovskiy and Krasilnikov, they are World Champions; so we will just try to enjoy the next match.” 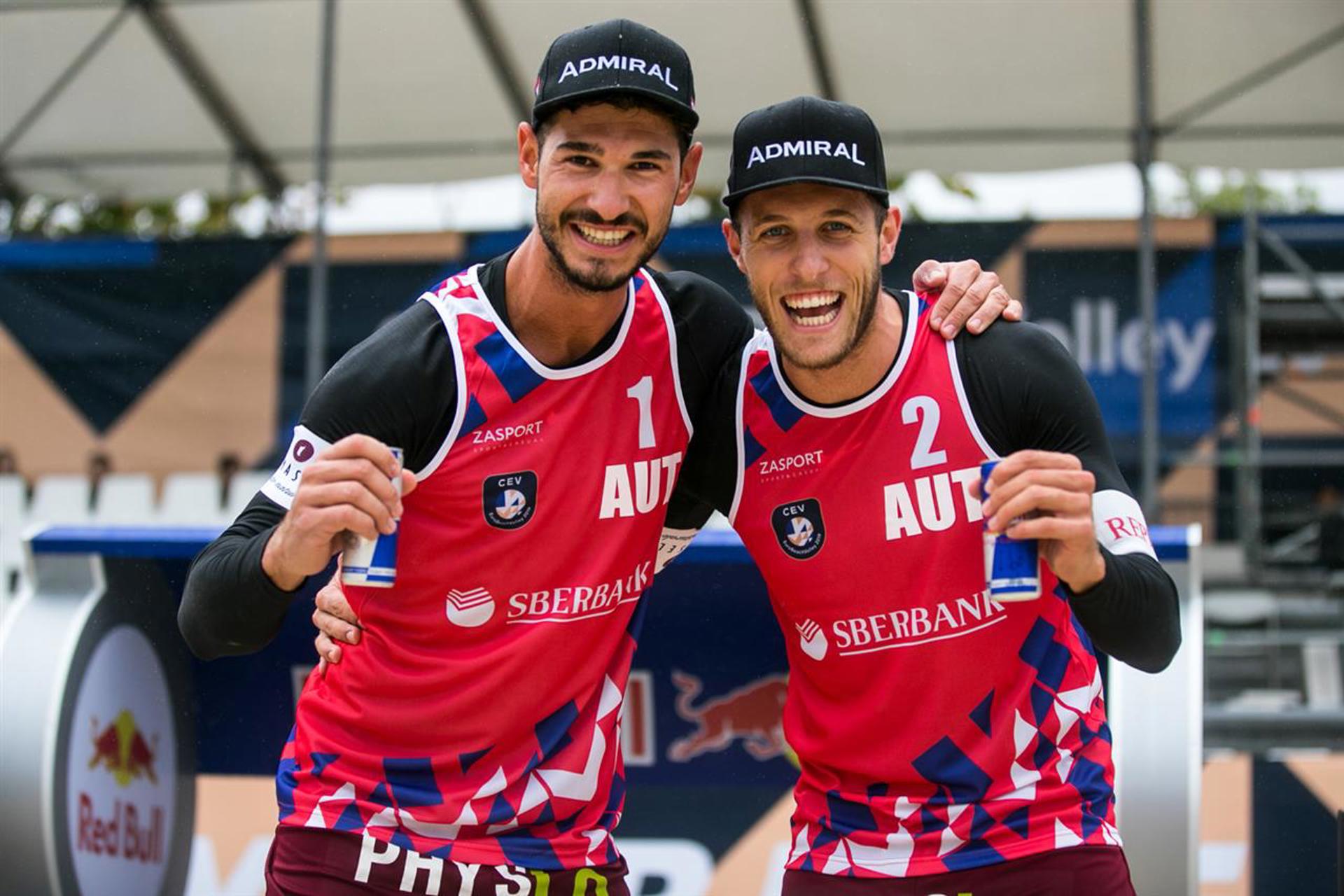 And it went quite well for Ermacora and Pristauz, as they created the biggest surprise so far at the Men’s #EuroBeachVolley by eliminating namely Stoyanovskiy and Krasilnikov with a straight 2-0 result (21-13, 21-19). Despite the warm support by Russian fans, the reigning World Champions could not find their rhythm in the match, while Ermacora and Pristauz were in control of the game. After it, the happy winners talked to media again, confirming that it turns out the windy weather is good for their play and they performed good in all of the components of the game, making it the best out of the so far played ones, leveling up. 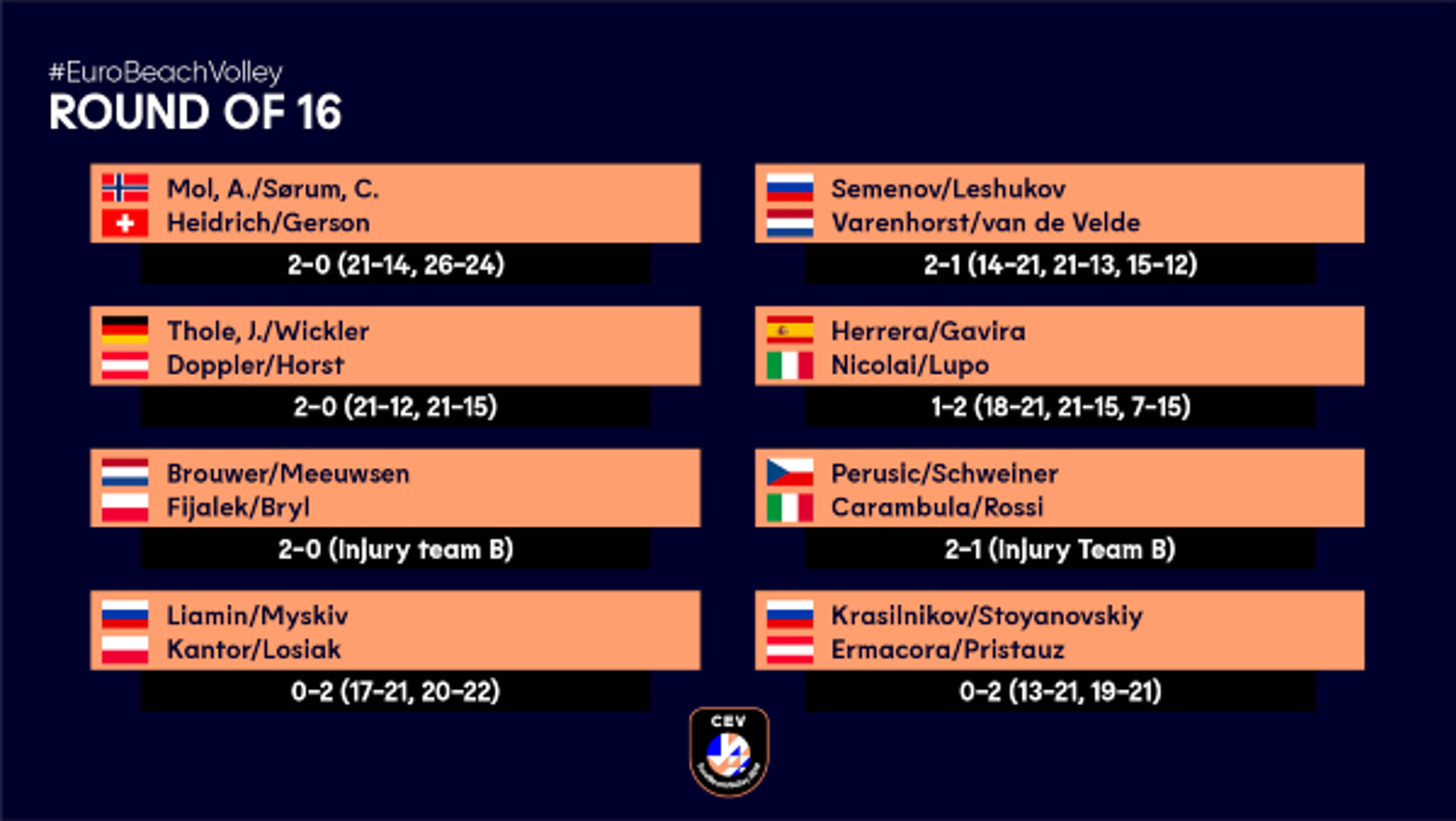 The match between Paolo Nicolai/Daniele Lupo (ITA) and Martins Plavins/Edgars Tocs (LAT) from Round 2 didn’t take place as the Latvian team dropped off due to an injury and later that day Nicolai and Lupo met on the court the Spanish Pablo Herrera/Adrián Gavira. In a close game Italians and Spanish gave each other one set, but in the tie-break Nicolai and Lupo started off better and eventually claimed the victory at 2-1 (21-18, 15-21, 15-7).

59 minutes lasted the match between Aleksandr Samoilovs/Janis Smedins (LAT) and Adrian Carambula/Enrico Rossi (ITA) in Round 2. The Italians made a great comeback to proceed ahead and after having lost the first set, gathered themselves for winning in the decisive moments, and thus claiming the victory at 2-1 (19-21, 22-20, 18-16). Carambula and Rossi then played vs. Ondrej Perusic/David Schweiner (CZE), but with the result being 1-1 and in the third one Mr.Skyball, as Carambula is known, got a knee injury and the team decided not to continue. 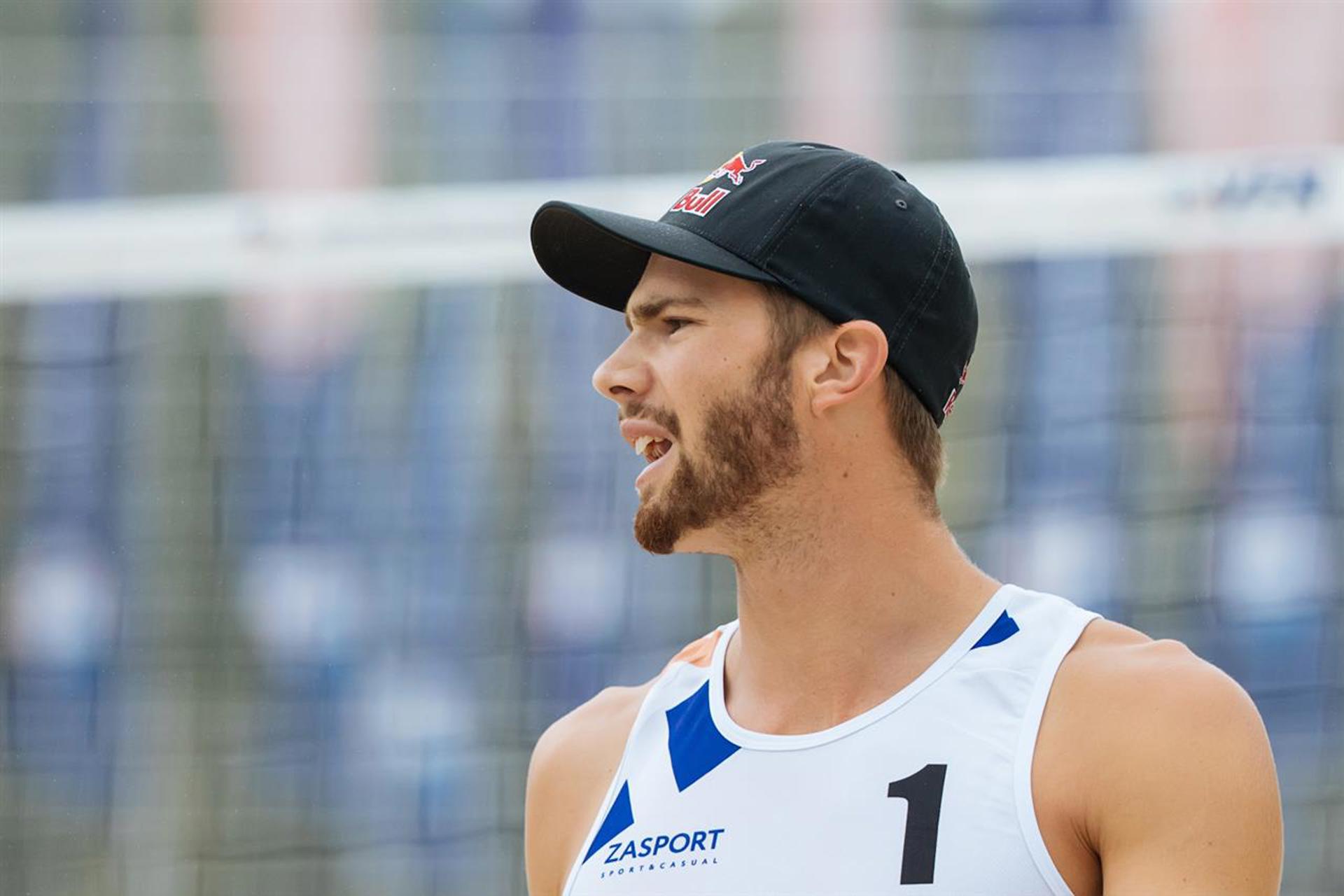 The Norwegian top team Anders Mol/Christian Sørum outclassed their opponents from Switzerland Adrian Heidrich/Mirco Gerson in Round 2, winning at 2-0 (21-14, 26-24). The Swiss players were close to tying up the match and bringing it into tie break, but Mol and Sørum kept calm and closed the match.

“We played a very good first set and the Swiss guys played a lot better in the second one. At one point, when the score was 16-12, we had to try our best at this exact moment, play the Beach Volleyball we can. We are happy to win in two sets and not in three, because the weather is windy, rainy; it was really cold.” 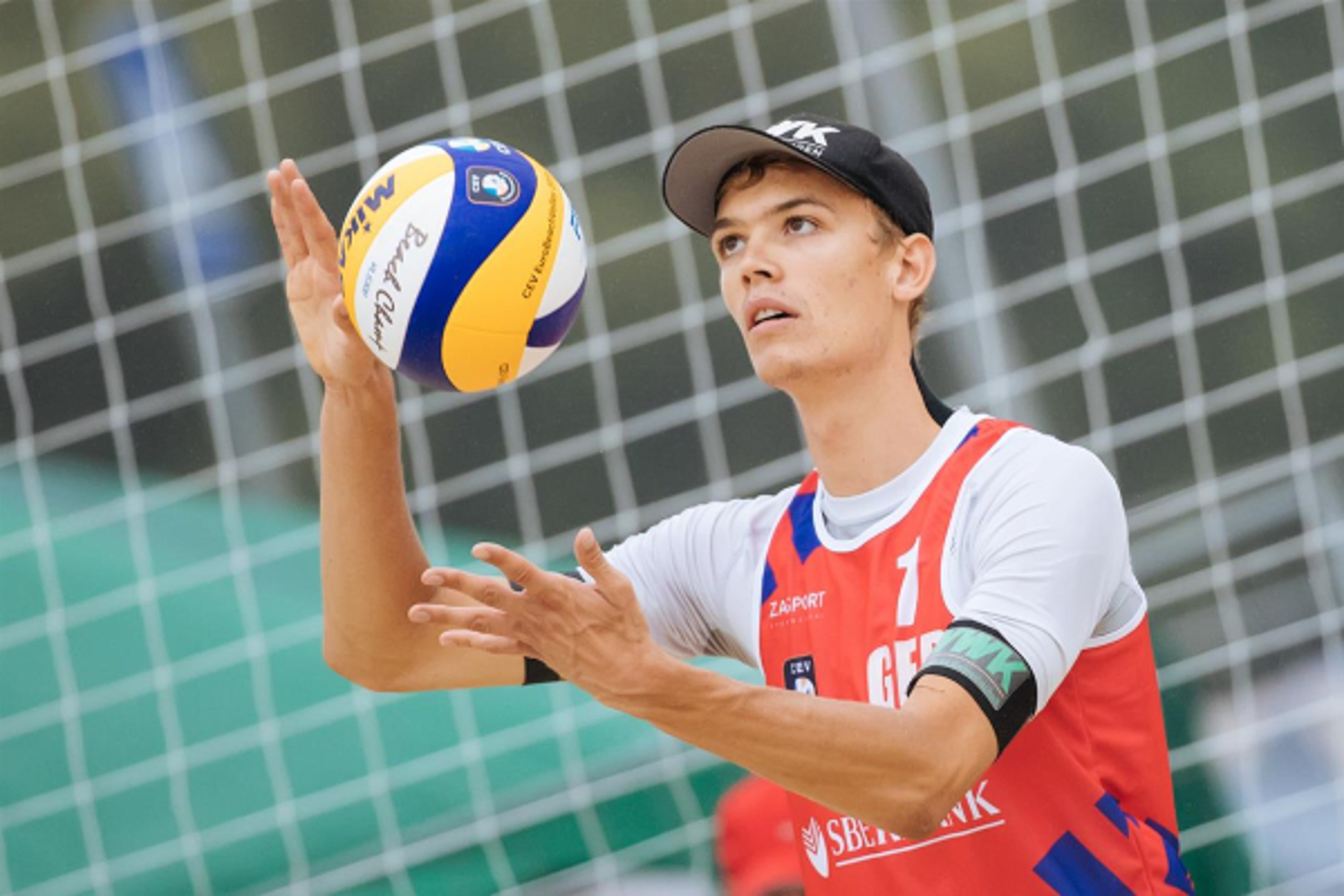 Thole and Wickler played Clemens Doppler/Alexander Horst (AUT) on Friday for a spot at the Quarterfinals and after a two-set battle emerged victorious at 21-12, 21-15. The German duo did not  allow their opponents to take the lead and comfortably closed the match with no drops in their performance.

“The weather conditions are pretty hard, but I think we had to get used to them here; and maybe we did it a little bit better than the Austrian guys, so we took the win. We had a good side out. Now we will be playing against the best team in the world, the Norwegians and we will have to put everything into this game and we will see how they play tomorrow. Normally they win their matches, but we will try to fight.” Konstantin Semenov and Ilya Leshukuv, who were topping the charts in Pool C, are the only Russian team to continue ahead and this way save the hopes of the hosts for a medal. The Russians, supported by fans, who came to cheer for them even in the rain, started bad in their match against Christiaan Varenhorst /Steven van de Velde (NED), by losing the first set. However, they turned things in their favour and after a tense game, with many emotions, in the last minutes of the third set, seized a 2-1 (14-21, 21-13, 15-12) victory.

Leshukov stated after the match that they were looking to enter the court with more confidence and this probably broke them down in the beginning. Semenov, on the other hand, added that the responsibility they were feeling on Friday was enormous, as they were the only Russian team to stay in the competition: “In the first set, we made a lot of unforced errors.  Then we found our way to ‘overcome’ ourselves and to rebuild the game by being calmer. Thanks to all the fans who supported us today, it helped us a lot, for sure!”